The Wizards and the rare three-second violation in crunch time

The play often discussed from Washington’s 125-124 victory over Portland has been the game-winning basket from Markieff Morris, but just after he stepped out of bounds. Unfortunately for the Blazers, the missed call couldn’t be corrected with a review and the Wizards escaped in overtime. It was a crucial win for Washington after a second straight game on the road, while Portland fell two games behind Denver for the final playoff spot in the West.

But there was another usual play that NEEDS to be talked about, one that happened with a minute left in the fourth quarter. No, not the four-point possession from Washington that put them up six points after trailing by 21 at halftime, but a defensive three-second violation against Morris. We can assume it was the right call (NBA.com’s play-by-play feed doesn’t offer a good look), but it’s one rarely ever made in crunch time. 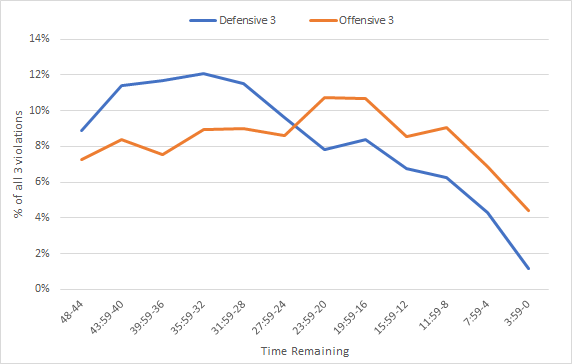 Going back again to 2002, Morris’ defensive three-second violation was only the ninth called with one minute or less remaining and the first time since 2012. Even with fouling and garbage time, that seems weird given how much isolation occurs at the end of games as teams trade efficiency for having the final possession of the ball. With less player movement away from the ball, maybe it’s just easier to have those three seconds in a player’s mental clock, though it’s hard to camp in the lane against a high pick-and-roll and/or shooting spread out across the arc anyway. Cleveland, for example, sometimes gets these violations called in their favor not while LeBron James pounds the ball above the arc, but as he posts up on one side of the floor and the help defense waits at the rim for a bit too long. Those are the type of plays that have been pointed out in the NBA’s Last Two Minute Reports when a violation was missed. Who knows, maybe it’s something defenses have commonly taken advantage of, at least in crunch time.

The Wizards were up six points at the time of the call on Morris, still a nice lead (97.6 percent win probability, via Inpredictable) where the Blazers had to score every time they had the ball and get defensive stops each time, but the technical free throw opened more scenarios for how that could be accomplished. Portland scored four points on one possession (the technical free throw plus a three-pointer), two points on another, and stopped Washington twice on defense. They almost prevented another game-winner in overtime, but we know now Morris’ bucket couldn’t be overturned.

All statistics were according to play-by-play data from NBA.com. Violation totals were through March 11.