So the season has finally come to an end. (We made it!) While a number of solid West teams limped to the finish line, the conference still posted a record versus the East that fit right in with their dominance since 2000. Below is a look at their final few weeks versus the East, weeks where non-conference play was all but already wrapped up with only 12 games left:

And a look at each team’s record and conference splits (click to enlarge):

And a few stats to measure this year’s non-conference battle with every season since 1971:

The 2015 West moved down a bit since my last look at those last few statistics, fitting right in with a typical season since 2000, as mentioned earlier.

Right now, there’s too much left to be decided before taking a stab at what 2016 will look like. We have the playoffs to play out, which seems to lead to one injury that’ll decide a team’s fate. Then there’s the lottery to determine the draft order, which we know from the past can really move the needle. (Think Tim Duncan and a coin flip between which conference he’d wind up in.) And then the draft, free agency, and so on. THERE’S A LOT OF TIME LEFT BEFORE NEXT SEASON, but it should be fun to see if the East gets a boost over the next six months.

So that’s it for this year’s non-conference updates, but if there’s something I missed or you’re curious about feel free to leave a comment on here or over Twitter (my tweets should be on the right side of this blog).

I also plan to post some other silly season-ending stuff before the playoffs start, but until then enjoy the break between now and the postseason!

AFTER FOUR WEEKS OFF WE’RE BACK WITH AN UPDATE IN NON-CONFERENCE STANDINGS. My first draft was typed in all caps but I narrowed it down to one sentence. Over the four-week break from posting, I actually did post some statistics I calculated over all-star weekend regarding the two all-star games that you can find in the My Soup section.

Anyway, the East fared okay against the West just before and after the all-star break but also after the trade deadline. From weeks 15 through 18, they finished 27-34 but were 21-20 coming into last week if that makes sense. Many of those losses last week were close games, including Cleveland’s overtime loss to Houston on Sunday, and finished week 18 6-14.

Below is the updated week-by-week breakdown along with non-conference records from teams over the last four weeks. 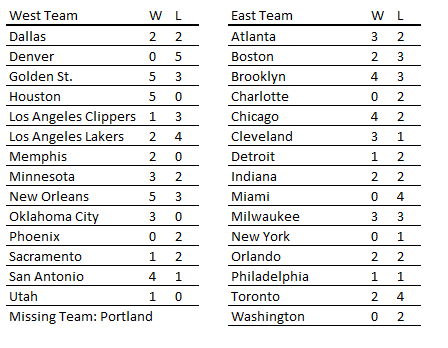 (Edit: If you compare the previous update to this one, there are slight changes in some weekly stats. I’m pretty sure I re-corrected the same errors I tried to fix in week 14, which was weird to say the least. Now, scoring margins and win totals all add up. Yay.)

So among other teams, Denver stunk, Houston played well, and Brooklyn has scored some wins that might not have been expected from them. They’re still doing that with a win last night over Golden State.

That’s all I have to say, though. WOW, GREAT ANALYSIS, but I don’t have much else to say as I have to post this ASAP and prepare for work way ahead of time than normal because SO MUCH SNOW.

Again, while I haven’t posted much at all on this here blog this season, I added some stats to the My Soup page. Otherwise, I’m writing at Nylon Calculus. In time I’ll add some different posts. I didn’t have time to post another Dream Team over all-star break like I originally planned, so I’ll save that for the season’s end. I already have a bunch of ideas for posts to write in the off-season.

As for the non-conference postings, I’ll include some more stuff next week than I did for this post. That shouldn’t be too hard since this week I just copied and pasted some statistics. Story of my writing lately, actually.

East vs. West Week 14: The East is rolling, plus some splits

I thought I wouldn’t write any non-conference roundups until the all-star break, but check out Week 14. THE EAST. There were supposed to be 27 games, but two were postponed on Monday:

(Note: There were a couple errors in a master schedule I have in Excel. Correcting them led to some minor changes in this week’s table compared to others. Minor, but noticeable. Most notably, Week 3 changed from 12-7 to 11-8. Simple data entry mistake that I didn’t notice until now.)

Anyway, the East since Week 7 are 81-89 and last week went 14-11 last week against the West, arguably their best stretch of non-conference play this season. Some of that is a little misleading, though. Oklahoma City is clearly better than New York even though the Knicks gave the Thunder a loss that could be huge in the long run, and Phoenix was likely going to win against Chicago and Washington when both were on tail-ends of back-to-backs. I’m not saying the Suns are worse than those two teams, but rest matters and they had an advantage each game.

And I’ve been meaning to run some numbers that paint a better picture than just looking at overall wins and losses, real or Pythagorean, the latter statistic a little goofy when applied the way I’ve been using it in these posts. I mean, I like to think after 450 games there is a large enough sample size to determine just how good or bad each conference was, and it’s not like anything I do will answer all questions, but I played around with some East-West splits anyway.

So below is what I looked at. I find Oklahoma City inconsistent health-wise to the point I left them off all splits save for conference-wide ones. That sounds crazy but I separated the West into the top eight and bottom seven seeds, but the Thunder were so weird to me that I left them off both. Like, when healthy they’re a playoff team, so it’s not totally fair to put them in the bottom seven where I wanted to see how the best and worst of the East performs against the mehhhh section of the West. This all might sound ridiculous and I apologize. If I run similar splits at the end of the season I’ll include the Thunder. Or just remove the top 8 teams and see if anybody notices.

Cleveland was a close call also, but I included them. This is all controversial, probably. The power I have on my own blog is out of control sometimes: Surprise, surprise! Good teams beat up on bad ones! Specifically the West though. I think that proves how much more deep the conference is, though most of us already knew and love to complain about that. Sure, the top five in the East can hold up versus the best in the West with an emphasis on the Hawks, but the sixth to eight spots (and possibly ten by the end of the year) in the West are obviously stronger than the same East seeds.

It is nice that the East has a juggernaut in Atlanta, though, and maybe Cleveland in time, making the conference at least tolerable. I might’ve already said this in previous posts, but the second round in the East is going to be pretty damn fun.

Anyway, hope the splits were interesting. Below is a look at this week’s non-conference games: 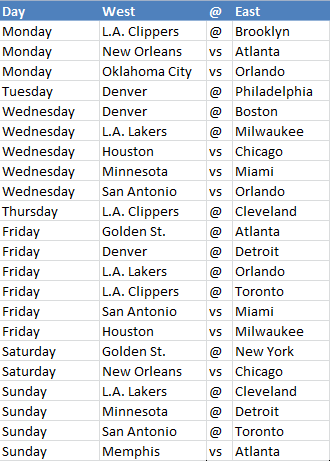 Three Nuggets and Lakers games for the East to feed off of as well as a 13-9 home-road advantage, and the East has some decent firepower overall. The top five teams play nine of the 22 games INCLUDING A GOLDEN STATE-ATLANTA MATCHUP. That’s probably the game of the week, but I’m writing this before I’ve done the Watchability Rankings so who knows.

After a two-week hiatus, Chicken Noodle Hoop is back with an East vs. West roundup. Since Week 11, 42 non-conference games went down and the East held their own by going 20-22, including 67-78 over the last six weeks. Not great, obviously, but not bad really, though the West ran 8.4 wins below their Pythagorean record.

Below are the updated standings through Sunday. After that I’ll do a quick summary of each conference over the last couple of weeks.

Overall, the record-setting point differential has disappeared and the worst-half of the West still has plenty of non-conference games remaining. Below is a look at what games are left to play with top eight seeds shaded:

Atlanta, the team that saved the East from disaster?

The West teams still have an uneven distribution of East games remaining, though maybe this is typical because of geography. Teams furthest out West are are among the ones with most and least non-conference games, which obviously includes Golden State, undefeated against the East with a mammoth game against Atlanta on February 6. WEEEEEEEEEEEE!

57 non-conference games will be played out from, well, yesterday to the all-star break with the West 2-1 so far. I probably won’t update this until that mid-season break since there are a bunch of other posts I’m trying to write up.

A day late again because, well, I actually like posting on Tuesdays. I’ll be posting Watchability Rankings on Mondays at Nylon Calculus anyway, and it’s kind of cool to already have a small percentage of non-conference games played out before previewing the week.

So by win-loss and point differential, Week 11 was pretty average with the West going 13-10 with a margin of victory of +4.61. Below are the non-conference summaries:

Should the color scales be reversed?

By point differential, the West ran over two wins worse than expected in Week 11 and nearly six wins worse over the last three weeks. Games against Cleveland, New York, Orlando, and Philadelphia are largely to blame. They aren’t the only East teams to lose against the West, but they’re getting squashed.

How about Detroit with Jodie Meeks and without Josh Smith, though? Seriously, what the hell? They beat two-thirds of the Texas Triangle last week, which may or may not have an impact on the final East vs. West record, and they spoiled a huge Week 11 for the West. They are running super hot to where they remind me of this insane hand in poker.

Also, the Atlanta Hawks are amazing. They snagged victories over the Clippers and Grizzlies which deserve more love than just two sentences. I am a terrible person for doing just that.

The Hawks don’t play a West foe in Week 12, though, and the Pistons only play one. So now I wonder how much of the non-conference records each year have to do with teams playing East vs. West games when they’re hot, cold, injured, very healthy, etc. I mean, I like to think it balances out over 450 games, but who knows? It seems like the East has more problems with those elements than out West, but I didn’t research that at all before writing it down, so… 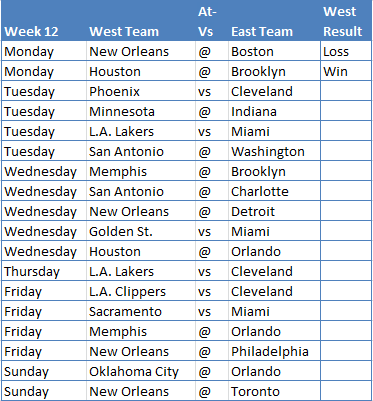 Houston (two non-conference games this week), New Orleans (four), Memphis (two), and San Antonio (two) take road trips out East while Brooklyn and Orlando play host to a couple of them. Miami and Cleveland also play three non-conference games this week, though they’re all on the road. It’s a crucial point in the season for both teams for a variety of reasons. Atlanta, Chicago, Milwaukee, and New York are absent which, for the most part, that’s not great for the East. Out West, the Pacific Division holds all of the West’s home games. They hold all of the cards, heh, or something. Not really, it just sounds cool, maybe.

Enjoy the rest of the week.