Last summer I wrote a shooting profile of Chris Webber at Nylon Calculus and later posted some of his passing stats here. During all-star weekend, I added to the latter but never updated the post. With the Lowe Post podcasts featuring Howard Beck and Shane Battier mentioning Webber and those early-2000s Kings, now would be good to, like, post those updated numbers instead of letting them sit in a folder. I also spent some free time adding a few more games, random thoughts, and GIFs. Webber’s best years are very good GIF material.

Below are the updated numbers. 2ary means secondary/hockey assists. It’s the same stuff found in player tracking statistics over the last two seasons: 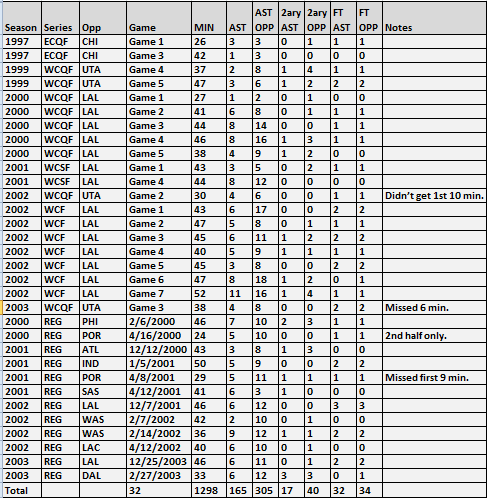 I thought that was a low-key amazing pass.

And then a few GIFs from the fourth quarter of Game 4 of the 2000 playoffs:

That was a really fantastic quarter.

That might’ve been what made Webber unlikeable. 17-point lead with ~16 minutes to go and doing a little showboating, but these two teams played a pretty physical game a week prior and that was Webber’s former team. REVENGE OR SOMETHING.

That was literally the first possession of the game.