With just over a month of NBA in the books, I decided to round up a couple random stats and put them here. This post went on the silly side of things as I looked at half-court heaves, which are unfortunately not doing too hot compared to last season when I posted a few (a different link for each letter!) thoughts.

Below is a look at 2001 to 2015’s numbers, via Basketball-Reference’s Shot Finder tool. The numbers are a bit different from previous posts. Since Casper Ware’s half-court shot last season was logged from 46 feet instead of the ~50 that was obvious on film, I gave the Shot Finder a two-foot cushion, increasing the range of shots to 45-94 feet. This isn’t meant to needle Basketball-Reference. Getting exact shot locations and the time the attempt was taken, among other things, is not easy.

Anyway, below are the numbers this season. I also added another column looking at how many points the heaves would have to be worth to reach an average of one point per attempt. 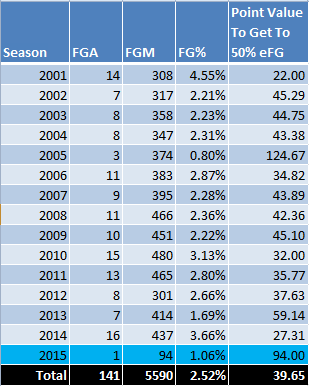 Four-point line? How about one worth 40 points? If this ever happens, some fans are getting max contracts.

John Henson is the only player to make a shot from beyond half-court this season, because I don’t know. Jamal Crawford leads the league in most attempted heaves with three, somehow not creating four-point plays on all of them. Some surprising names to attempt a shot or two: Joakim Noah, Dwight Howard, Gorgui Dieng. Weeeeeeeee

Stay tuned over the rest of the season for more heave updates. Until then, have a good heavening. /Hides