One of several behind-the-back assists from Webber.

Last season was the first with player tracking data logged for every team. While this continues to be nothing short of fantastic, the early-2000s feel like the Stone Age and the needy side of me wishes it was available for players of that era and earlier.

One example is Chris Webber and his passing. Among other dishes, watching him on the low post whip the ball behind his back to a cutter is a timeless joy. I could only watch so many of those highlights while attempting to write about his scoring before tallying up some passing stats, even some we’d see from the player tracking data today on NBA.com.

NBA.com has assist charts back to 1998 with shot locations from them, so I made distribution stats to sort through. One sheet has the basic shot zones and another uses NBA.com’s from their shot charts. (Names I gave each location can be found in a screenshot).

But hopefully just looking at the tables helps explain all of that:

What might be interesting are the swings in the threes, like nearly 1/4 of Webber’s assists coming from beyond the arc in Sacramento compared 15 to 20% everywhere else. That’s not too surprising given the differences in teammates, but I felt like going into a little detail:

So the assist distribution looks fairly roster-dependent. The same can be said while comparing Webber’s %s with a few others: Kevin Garnett, Mike Bibby, and LeBron James.

It wasn’t just KG who loved mid-range shots in Minnesota. Ray Allen helped alter his and LeBron’s assist distribution when teaming up with each, but Shane Battier playing alongside James the last two years more than Udonis Haslem helped too. The differences with Bibby and Webber make sense with their pick and pop game (Christie + Webber too, and Bibby with other bigs). In 2002, 55% of Bibby-to-Webber assists were from mid-range, per NBA.com.

Looking at individuals assisted by Webber, here were some where he was their primary feeder: ’98 Rod Strickland, ’99&’00 Peja Stojakovic, ’01 Jason Williams, ’01-’05 Doug Christie (minus ’04), ’03&’05 Mike Bibby, and ’06 Allen Iverson, according to NBA.com. It’s vague as I just took total assists without weighing it with anything else like minutes with Webber versus other passers, but there’s no lineup data available pre-2001 to match NBA.com’s stats back to ’98. It does make me think, though, that in 2006 Webber would total more assists alongside a sharpshooter like Stojakovic, but with Iverson he’d collect more free throw assists.

Speaking of that, I’ll end this by sharing passing stats like those FT assists but also primary and secondary assist opportunities. These were from available playoff games on YouTube and I would’ve logged some regular season ones if not for my laptop dying during those:

Those were some pretty decent defenses: The ’97 Bulls, ’99 Jazz (faded badly though), and the ’00-’02 Lakers. Dreadful defenses vs Sacramento probably paid a steeper price for being a half-step slower versus Webber, with him likely carving out more hockey and FT assists versus them.

Webber still stuffed the stat sheet even with teammates who didn’t take full advantage of primary and secondary assist chances. The 1999 and 2000 Kings were 5th and 3rd in 3PA rate, respectively, but 24th and 28th in 3P%. Stojakovic was still growing into the scoring shark he eventually became, Williams had a quick trigger, and Corliss Williamson was not a small forward who was going to stretch the floor. The 1999 Kings still had some flash, but they were kind of feisty.

As for 2000, Webber was a beast in Game 1 vs LAL, especially the first quarter, and his passing in the 4th quarter of Game 4 was sublime. In the dead part of the NBA off-season, I’d highly recommend watching those games and other full length ones of him on YouTube. 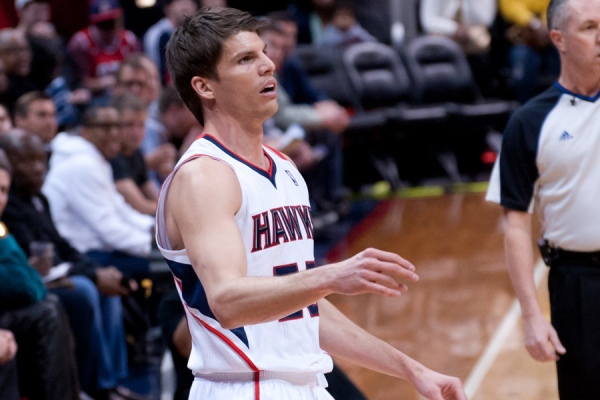 Kyle Korver has been terrific out of the gates, making nearly 52 percent of his threes on over five attempts per game. Fantasy basketball-wise, the Hawks’ starting small forward (or shooting guard, depending on the night) is ranked in the top 50 for both eight and nine-category leagues, according to Basketball Monster.

Korver went off last night against the Clippers, shooting 6-for-9 on threes to help the Eastern Conference nab a rare win over a team out West, but just how many players have made six or more threes in a game this season? I took a look, via Basketball-Reference. At first, I wanted to list every time an active player made six threes in their career, but that totaled to about 800. That, and Basketball-Reference uses the term “active” a little loosely since Tracy McGrady, among others, is still listed as that.

Anyway, take a look at this year’s six threes club. I also included minutes, home/away games, win-loss results, and some others just to look at the differences between each player listed:

Unsurprisingly, a team with a player who’s made six threes has won just under two-thirds of those games. More interesting is how often those threes were made on the road. You’d expect some role players off the bench who are listed here to perform better at home. Maybe they do and the three-point outburst is just an outlier. We’ll see if that’s true as the season progresses.

Also worth noting, 8.5 percent of total games by those players have involved making over six threes. Should that frequency remain the same, someone on that list will make six threes on Friday night at the latest. Let’s see who that is, or if another player will join the club exclusive to only…25 players. That’s kind of a big club through just five weeks and it’s obvious what the password is to get in, but whatever. It’s great to witness three-point barrages and there’s still four months left for them to happen.