RIP Stuart Scott, who died Sunday at the age of 49.

A little late with the weekly roundup thanks to having the worst sleep schedule on planet earth.

Despite a legitimate Week 10 schedule for non-conference games, the West went 15-7 with a +10 point differential. That margin of victory made for a Pythagorean record of 17.6-4.4. Looking at the season so far, Week 10’s 2.6 win difference between the two win metrics is the largest we’ve seen this season. COOL. PYTHSANITY.

Below is the week-by-week summary below and actual scores from last week: 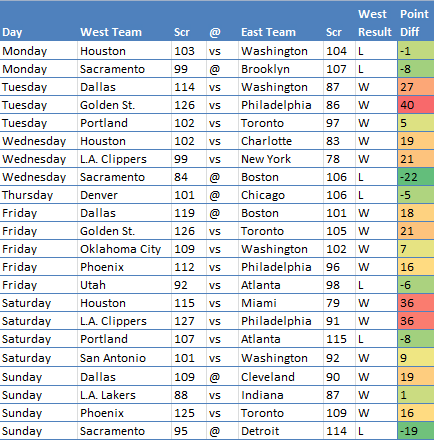 So some large margins of victory came at the hands of East teams possibly running out of gas during their road trips out west. Philadelphia, Toronto, and Washington got, for the most part, roasted. In particular, this did not look fun for Washington:

Wiz going through HOU-DAL-OKC-SAS-NOP in 7 days looks like all kinds of hell.

Atlanta was/still is in good shape, though, having won at Utah and Portland on a back-to-back and the Clippers yesterday. WHOA. The top-5 or so out East gives the conference hope but it’s only January, for better or for worse.

Week 10 wasn’t pretty for all West teams anyway. The Sacramento Kings continued their downward spiral by going 0-3 on their road trip at Brooklyn, Boston, and the rising Detroit.

That’s about it for the bad times out West, though. A look into Week 11: 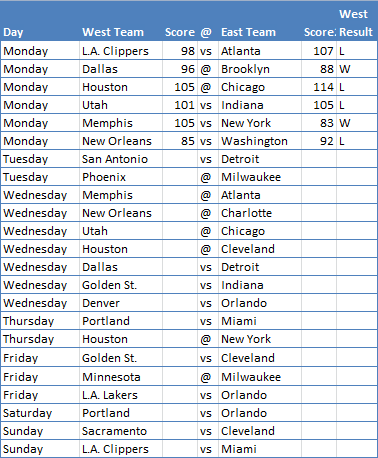 The West enjoys another week of more home games, 14-9, though they already lost three of them. Cleveland, Detroit, Indiana, Miami, and Orlando will be traveling while Atlanta and Washington finished up their road trips last night.

Maybe this week will be different for the East. There are a lot of games featuring decent to pretty good teams from that conference and maybe they can squeak out an extra win or two compared to last week. But I’m not that picky. Losing by less than 20 points works, too. We need some more games that go down to the wire, specifically Cleveland @ Golden State on Friday.

East vs. West Week 7: West with another winning week, but barely

A day late because, I don’t know really. Kind of ridiculous when this series is usually my only contribution to my own blog each week.

Week 7 wasn’t too bad for the East, finishing, um, 9-11, which makes for the seventh straight week the West finished with a winning record, but the East was decent! This was mostly thanks to a strong weekend, including a near-upset of Philadelphia over Memphis. Below is a look at the week-by-week summary and scores from last week: 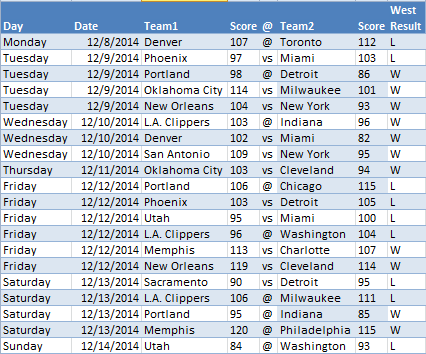 Lots of Clippers, Jazz, Suns, and Timberwolves in Week 8, playing in 13 of the 22 non-conference games. For the East, Indiana and Milwaukee are in four games each. Both played in one last night. FUN STUFF.

A quick screenshot of Week 8 with scores from Monday: 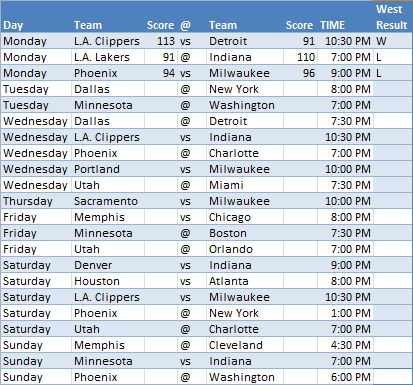 So after this week there will be over 150 non-conference games. Will try to make next week a bit more interesting now that there’s a decent sample of games already played.

In Week 2’s non-conference roundup, I noted that last year’s Western Conference began their dominance in weeks 3 through 7. They went 69-23 during that stretch.

There could a case for last week to be ranked higher. The West went 18-for-21 despite 19 of the games featuring their team going off zero or one day of rest compared to 13 occurrences for the East, plus nine games where an East team had a rest advantage of one day or more. The East also had five more home games with a 13-8 edge.

The issue came, as you might’ve guessed, with talent. Using SRS as one measure, at the time of 15 of the 21 games, the West team had a higher mark, per Basketball-Reference. The West won 14 of those games, their only loss when Chicago defeated the Clippers without Derrick Rose and Pau Gasol. It was a hell of a victory for the Bulls and ended what was a struggle of a Monday for the East. The Lakers won in Atlanta the next day, the West went 5-1 on Wednesday, Sacramento and the Clippers took advantage of some missing players on Chicago and Miami’s squads in their TNT games, and the weekend was quite ugly. The West went 6-1 from Friday to Sunday and outscored opponents by a total of 100 points. Ew.

I’m not sure it gets that much better for the East. Check out what matchups take place in Week 5: 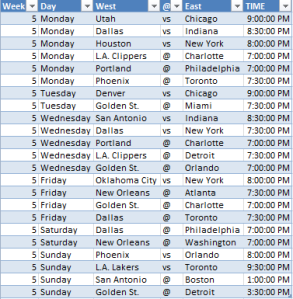 The East has another five-game advantage at home, but as usual the West has some heavy hitters. Golden State and Dallas each play four non-conference games while the Clippers, New Orleans, Phoenix, Portland, and San Antonio play two each. For the East, most frequently on the menu-I-MEAN-SCHEDULE is Charlotte, New York, and Toronto. Chicago, Detroit, Indiana, Orlando, and Philadelphia combine for eight other games. For the most part, that’s not great.

Some other bad news for the East might be that Houston, without Dwight Howard, does not play another non-conference game for another month after Monday’s matchup versus New York. Minnesota, not doing too hot without Ricky Rubio, among others, is also on a bit of a non-conference break. They play their next non-conference game on December 3 (Week 6) before playing a bunch of East foes in Week 8. The East will avoid Memphis for a while, though, so at least they won’t match up against one juggernaut.

But a few more are looking to feast. Last season, much of the West took advantage of road trips out East and against those traveling on west coast trips. Let’s see if it also continues to be the case this season.

About a month ago, I fiddled around with graphs visualizing how many points a team scores from specific shot locations. While it was something I enjoyed working on, there wasn’t a whole lot of space to include both GIFs and pictures while looking at the difference between a squad’s offense and defense. Back then, I went with GIFs but now I’ll include some photos of the graphs with updated percentages.

I also left off effective field goal percentage this time around so I wouldn’t flood a post with a ton of huge pictures. What’s left is a percentage of points a team scores at six areas on the floor: restricted area, in the paint (non-RA), mid-range, corner three, above the break three, and free throws.

In the future I’ll experiment more with these types of graphs, but for now these are the ones for each team over the entire season, both on offense and defense. They’ll probably appear blurry but clicking on the picture, then zooming in helps a ton.

Also, below the picture are links to team graphs for offense only and defense only. Enjoy, hopefully:

Similar to what I mentioned in the first post, the graphs for the best and worst offenses and defenses just aren’t the same as one another. Take the Heat, Clippers, and Mavericks as the top three offenses, for example. Thanks to LeBron James, Dwyane Wade and Chris Bosh, Miami scores a ton of their points in the restricted area — 36.5 percent, to be exact and fourth-highest in the league. Meanwhile, the Clippers are near the middle in point distribution from a few locations, but with the help of Blake Griffin they get just under one-fifth of their points from the free throw line. Dallas, with a nightmare of a scorer to gameplan for in Dirk Nowitzki, is weirdly balanced in all locations as they don’t appear too high or low in any of them.

Defenses are more similar as Indiana and Chicago both concede a bunch of points from mid-range. The Spurs and Warriors, in third and fourth place in defensive efficiency, respectively, have similar mid-range portions of the graph but allow more points in the paint (non-RA) region than the top two teams. Overall, it would seem like offenses would want their offenses to shift as far to the left side of the graph as possible and the opposite for defense.

I’ll actually admit these graphs are slightly misleading, one reason being that corner threes don’t jump out in them but are nonetheless important to team success. Attempts per location looked about the same and points per location was slightly different when comparing offense to defense. In the future, though, I’ll sort by the latter stat but I had a really weird time calculating it last night and this morning and ran out of time to put those graphs together.

Lastly, below are two tables of the top and bottom five teams in point distribution for each shot location. One table is for offense and the other for defense, starting with the former:

All stats, including ones used for tables and graphs, are according to NBA.com. 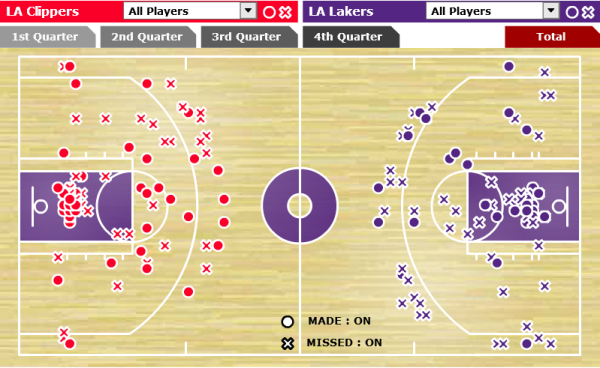 If last night’s blowout between the Clippers and Lakers actually happened and wasn’t one of those bizarre dreams you have while napping, it can be clumped in the middle of a special group of games where a team (or sometimes both) absolutely feasted at the rim.

Unfortunately for the Lakers, the Clippers were responsible for over two-thirds of those (mostly) bunnies all while they gave the purple and gold their worst loss in franchise history.

40 of the Clippers’ points within the restricted area came from lobs finished by Blake Griffin and DeAndre Jordan, baskets by Darren Collison, and whatever Danny Granger has left in him. The team as a whole totaled 60 points inside that half-circle that was like a landing pad after fast break opportunities. The production from that area of the floor ranked above 99.5 percent of all single-game shot location logs this season plucked from NBA.com.

Below is the other .5 percent, sorted by the season-high for most field goals made within the restricted area:

The Lakers lead the league in most field goals allowed inside the restricted area and most attempted there, and it’s not that close between them and second place in those stats. So maybe it’s not that big of a surprise to see them on that list twice as an opponent, especially when Detroit typically scores a ton of their points at the rim and the Clippers added some extra salt during the third quarter of last night’s game when it was over by halftime.

As for the field goals the Lakers allowed the Clippers to attempt around the rim, last night’s 44 shots weren’t that close to the league’s season high of 53. Unfortunately for the Lakers, that was set in their game against Detroit (which they ended up winning, though).

Going into the last five weeks of the season, we’re bound to see another outlier game or two allowed from any shot location not just by the Lakers but other teams limping to the finish line like the 76ers (poor Thaddeus Young), New Orleans (poor Anthony Davis?), and the New York Knicks (poor, poor Carmelo Anthony), among other teams.

But who knows? Maybe the Lakers will be on the good side of one of those outliers. After all, in their last 20 games they’ve been one of the best 3-point shooting teams both in volume and accuracy, so there’s that.

The least that could be asked out of them right now, however, is for last night to never happen again.

All stats are according to NBA.com.