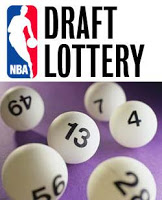 Every NBA squad has a need to address this summer. Some examples include a pass-first point guard for Sacramento, a center who doesn’t bowl or dance for Philadelphia, and a psychiatrist for the Lakers. The NBA Draft is a chance to fill those holes on the court or in the head of Dwight Howard for a cheap price.

And with everyone and their moms composing a mock draft lately, I decided to join in on the fun.

I conducted extensive research before publishing my mock draft, trust me, though it only addresses teams in the NBA lottery. What’s the point of venturing any further? My adroit analysis tells me that draft picks outside the lottery are essentially worthless. Right, San Antonio?

With that in mind, here are my expert 14 picks:

Cleveland’s reaching in the draft gets more weird every year, but it will prepare them for their biggest reach of all time next summer (though that will happen in free agency).

He has that Fran Vazquez potential.

Withey teaming up with Jan Vesely to create the most terrifying frontcourt in NBA history, at least in the nightmares of every Wizards fan, is too good to pass up. This pick is a no-brainer.

“He has the name of a winner” – Michael Jordan, probably.

If Porter’s still on the board, his tantalizing unibrow potential makes him a must grab at #6.

Muhammad should mesh well with every other shoot-first player on the Kings.

Because Minnesota needs another ridiculous argument that the Timberwolves are too white.

Noel falls right into the injury prone lap of Portland.

Huge risk here. While Gobert makes sense to help celebrate the 20th anniversary of drafting Shawn Bradley, there is a chance that because Gobert’s from France that he knows how to flamenco dance. I’ll be rhyming here all day.

The Mavericks will trade this pick to the Lakers for cash considerations. Given his name, Allen Crabbe would fit in perfectly with the Lakers. This is a win-win trade for both teams. (Edit: Well, unless it’s really not pronounced ‘crabby’. Oops.)

I feel like every player from Gonzaga is automatically affiliated with the Jazz.