The good, the bad, and the ugly shooting stats from SportVU 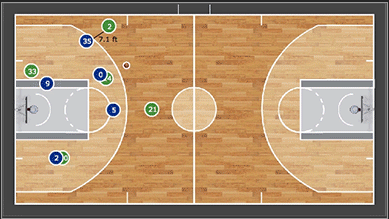 We’re now one month into the NBA season, but also one month into sorting through STATS LLC’s SportVU Player Tracking system where stats from hockey assists to a player’s speed can be tracked, among other things. (Shameless promotion: I wrote about my first impressions of it here.)

And though it’s still too early to draw permanent impressions from information it’s spat out, some of it is still glaring like shooting percentages, for example. It’s easy to decipher between a pull-up jumper and a catch-and-shoot situation, making those two statistics a couple of the easiest to sort through the good, bad, and ugly that I handpicked and posted here.

For ‘the good’ and ‘the bad’, I took a handful of players from each category I thought qualified while one special player made ‘the ugly’.

I also included two other SportVU categories: Drives and Defensive Impact to go along with Pull-Up and Catch and Shoot.

This is all quite amazing. Bledsoe, a perceived brick thrower last year, has been hot this season. It’s one example of why I wrote some of the stats being glaring. These all may be small sample sizes right now, but they catch the eye nonetheless and make me curious if they hold up in the long run.

Even with his improvements across the board, I still think Lance Stephenson shoots with his eyes closed.

Kevin Love‘s outlet passes make up for this.

Could someone make this a 5-man lineup and see if anyone dribbles?

There’s Eric Bledsoe again. Another notable is Reggie Bullock, who has the potential to carve out a career as a three-and-D wing, one the Clippers could use right now but he hasn’t provided much so far.

Who knows if Tinsley can revive these numbers. He was waived three weeks ago by the Jazz.

Chris Kaman making a list like this is so much better than one about centers who take wayyy too many jumpers. Also worth noting is John Henson, who in time can form a nice rim-protecting duo with Larry Sanders (whenever the latter plays again).

Before the season, it sounded like DeAndre Jordan was going to be Defensive Player of the Year, so this disappoints me intensely.

Who knows just how much of an impact Haslem will be going forward since Michael Beasley is logging consistent (AND PRODUCTIVE!!!) minutes off the bench.

You can pick and choose which player is more meaningful when driving to the rim, with LeBron likely being a favorite.

Surely Russell Westbrook’s percentages will bounce back. I worry about Corey Brewer’s though. He’s like a paper airplane: once you let him fly, you have no idea where he’ll land. It’s made for several “noooo…yes!” moments and vice versa.

This isn’t really terrible since Jose Calderon is in the top 50 in hockey assists at least. He rarely gets into the paint anyway compared to the rest of the league’s guards, though the points he generates per drive is more similar to those in ‘the bad’ category than ‘the good’.

Through 17 games, Calderon’s stats when driving to the rim are more perplexing than ugly.

All statistics are from NBA.com.

One thought on “The good, the bad, and the ugly shooting stats from SportVU”