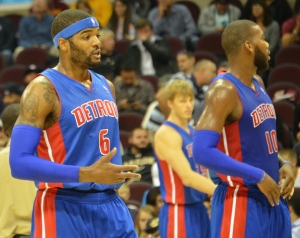 What if I told you two days ago the Detroit Pistons had a 13-point fourth quarter lead against the 20-win Blazers, only to blow it and lose on a buzzer-beater by Damian Lillard? Not only that, but Josh Smith scored 31 points on only 17 shots.

We’ll probably never see that efficient of a performance again by Smith, who Detroit should’ve kept feeding the ball to while they had a double-digit lead. Unfortunately, he only took one shot in the fourth quarter and overtime combined. Detroit wouldn’t let that happen twice in a row, not even against the best defense in the league in Indiana.

For better or for worse, Smith was chucking all game last night against the Pacers, nearly mimicking the ESPN documentary series by finishing with 29 shots and 30 points. There were moments of brilliance that were overshadowed by frustrating shot selection: fade away jumpers, long twos with 12 seconds on the shot clock, isolations leading to more long twos. All three of those kind of shots by Smith resulted in barely grazing the rim when they didn’t go through the net. When the first long two swished, Indiana must’ve had an evil grin knowing Smith would continue flirting outside the paint.

And for the most part, he did:

As you can see from the shot chart above, long jumpers accounted for over half (!!!) his attempts, bringing back memories of Rudy Gay‘s performance against Houston. Though Smith was effective from those spots percentage-wise, he was at his best when he scored by moving off the ball. Twice he took advantage of miscommunication between Paul George and whoever was guarding Greg Monroe.

Rather than showing Smith’s baskets from moving without the ball by pasting screenshots that take up a ton of space, I put them in a short video with captions up top:

Smith could’ve easily sat around the perimeter, hoping Brandon Jennings would feed him for, you know, a jumper he only makes 25 percent of the time on over 200 attempts, according to NBA.com. He produces just 0.68 points per spot-up shot, according to Synergy, ranking 205th in the league. That’s not good when 20 percent of his shots come from that situation.

Good thing Smith cut to the rim instead, an area where he shoots nearly 67 percent from and produces 1.24 points per attempt (35th-best). He also showed off a lefty jump hook last night, one he doesn’t take anywhere near as often probably because of the cramped spacing between him, Monroe, and Andre Drummond. Not a lot of those hook shots dropped versus Luis Scola, Paul George or David West, but for the season he’s 24-of-44. Efficiency!

But those efficient shots were scattered between the long jumpers Smith chucked to varying degrees of success. Maybe he took more of them than usual because of Mount Hibbert lurking in the paint, but they’ve become a daily occurrence regardless of the opponent. It puts an earlier blog post praising his shot selection to waste, though it does make Detroit handing Indiana their first home loss of the season that much more impressive.

3 thoughts on “Josh Smith nearly goes documentary, barely misses out on 30-for-30 performance”