The best and worst teams in crunch time 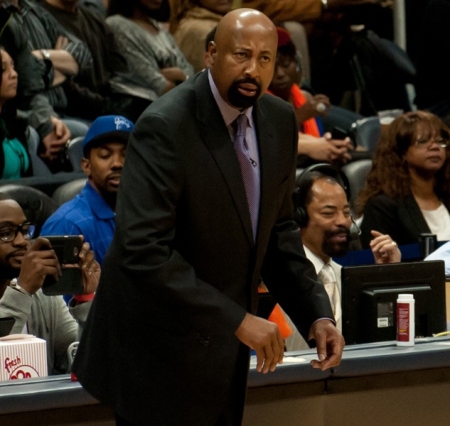 Last week featured the top 10 go-to players in crunch time. This week, and especially after the Knicks’ meltdown against the Wizards, I wanted to look at some team stats.

Depending on what you characterize as “crunch time”, though, the sample sizes can be even smaller than the ones I included for this post. For example, if it means when there’s one minute left in a close game then some teams will have only totaled 10 to 15 minutes. There would also be a ton of free throws and last-second situations, which makes for inflated offensive ratings and pace.

FUN FACT: Only the Raptors have a pace below 100 with one minute left in crunch time, according to NBA.com, which makes sense when Dwane Casey has a knack for wasting 2-for-1 opportunities and/or not fouling when down with 25 seconds left:

Every other team has a pace ranging from 116 to 156. If we define crunch time as within five minutes left and either up or down by five points (like what I used to determine the go-to players), the pace goes down to anywhere between 90 and 105. We also get a larger sample size between 30 and 80 minutes, depending on the team.

Let’s see how this works out, beginning with the best and worst 10 teams according to net rating and then by shooting percentages.

It’s weird to see a positive net rating for the Pelicans when their plus-minus is negative four. I’m not exactly sure how that happened or how it happens in the first place.

The Marc Gasol-less Grizzlies are at the top, though. They’re the best defensive rebounding team in the league in crunch time, grabbing 85.3 percent of opponent’s misses and allowing only four second-chance points. Memphis also grinds the game to a halt, relinquishing only two fast break points and 22 points in the paint. The former stat ties with Miami for best in the league while the latter ties for second with Indiana and San Antonio. (Dallas is best at preventing points in the paint during crunch time by allowing only 20 over 46 minutes of play. Utah is near the top of that list, as well as in least fast break points allowed.)

For the Blazers, they squeak into the top 10 in fast break and second chance points but blow teams away from the arc, shooting 18 for 39 on threes. It also helps when Damian Lillard does Damian Lillard things:

The Jazz are also up there in scoring efficiency, mostly thanks to shooting nine for 16 from three and a good dose of (gasp) Marvin Williams. Meanwhile, Oklahoma City has actually been terrible from the field, shooting just 15 for 60 on shots outside of the restricted area. It’s like them and the Jazz got their stats mixed up.

More on shooting percentages in a bit. Let’s look at the 10 worst teams in crunch time, according to their net rating:

It’s interesting that Toronto’s not up there until realizing Rudy Gay was pretty good in late-game situations.

Quite a few of these teams are at or near the bottom 10 in allowing fast break and second chance points. They also give up a few more free throws. 22 of Golden State’s 54 free throws allowed, for example, have come within one minute left. The discrepancy of fouls drawn is huge within one minute as well, with Golden State only drawing two compared to being whistled for 14.

It’s odd that Golden State has one of the worst net ratings since Stephen Curry has been one of the best in crunch time, but the foul discrepancy over the final five minutes of close games is pretty consistent with the best and worst teams. Four of the top five with the largest foul differential not in their favor are also in the bottom 10 teams in regards to net efficiency. Meanwhile, four of the top five with fouling in their favor are in the top 10.

Large positive and negative net ratings are typical over the course of a season, but the small sample sizes allow for change over the next four months. Shooting percentages can also change. Let’s take a look at the 10 best and 10 worst shooting teams in the crunch, sorting them by effective field goal percentage.

Weird note: Dallas and Phoenix already have 16 games that qualified for crunch time numbers, the most in the league. San Antonio has had the least games by far, with only 8.

I was expecting a lot of the Suns’ threes coming from drive-and-kick situations thanks to Eric Bledsoe and Goran Dragic, but most came from shots off the dribble. Gerald Green had one contested fast break three that displayed terrible judgment, but went in anyway. Whatever.

Not surprisingly, though, the best effective field goal percentages come from the teams draining threes. There are also teams you would expect to be at the top: Miami, San Antonio, Dallas, the Clippers, and probably Portland. “Star-less” teams like the Jazz and Nuggets are also shooting better than the Knicks, for example. More on New York in a bit.

There’s also a pretty big difference in assist percentage between the best and worst, among other stats. It’s no surprise that Toronto, Cleveland, Detroit, and Charlotte are at the bottom of that statistic when each often rely on their point guard or a wing to go one-on-five. And just like that, I spoiled nearly half of the bottom 10 teams:

A few of these teams were expected to struggle. The Bulls and Nets have been depleted, Milwaukee’s a mess, and the Pacers – wait, what? Like last year, Indiana barely squeezes into the bottom 10 in shooting efficiency. Their free throws help put them in the middle of the league in true shooting, however. Overall, their offensive efficiency is about average.

At the bottom in effective field goal percentage are the Bobcats. Charlotte can’t seem to make anything outside the restricted area, but they have nothing on Carmelo Anthony, J.R. Smith and the rest of the Knicks. If we fiddle around with the minutes that represent crunch time, we get this out of New York:

Those field goal percentages are dead last in the league. Only two of the made field goals within two minutes have come outside the paint (two-for-25). That should change for the better with Tyson Chandler returning as soon as tonight. It can’t get much worse, though I’ve come to expect the unexpected from New York.

Overall, the sample sizes are admittedly small but nonetheless worth looking at. There’s plenty of time for teams to turn things around but an awkward outlier or two will probably remain, like when the Charlotte Bobcats and the post-LeBron James pre-Kyrie Irving Cleveland Cavaliers had two of the best net ratings in crunch time in 2011. Miami will likely creep their way into the top 10 in terms of net rating as well. They’re just too suffocating to be left out.

All statistics are from NBA.com.

2 thoughts on “The best and worst teams in crunch time”