East vs. West Week 5: Same result just re-defeated or something

(Not my best attempt to go off of the “same soup just re-heated” line.)

Week 5 actually looked interesting through Monday’s set of non-conference games. The East went 3-3, including Indiana beating Dallas on the road, but then the West took care of business. Golden State went 4-0 in non-conference games last week while Houston, the Clippers, Portland, and San Antonio each went 2-0. New Orleans lost both of their non-conference matchups. Meanwhile, Kobe Bryant and the Los Angeles Lakers are somehow 3-0 against the East after last night’s win against Toronto. (We will miss you, DeMar DeRozan.)

It also looks like the West also got a bit more brutal thanks to Oklahoma City getting back Crazy-High Usage Russell Westbrook. They’re something of a feature team in Week 6’s matchups as they play two non-conference games over next weekend: 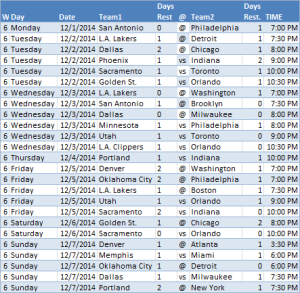 The home court advantage the East enjoyed the last two weeks is mostly gone. They play one more home game this week than the West, a mehhh 13-12 edge. They do have something of a rest advantage, though: 5-2 edge in games where one team has one or more days of rest compared to an opponent on the tail-end of a back-to-back.

But dang, this could be another bad week for the East in the wins and losses. Boston, Detroit, Indiana, New York, Orlando, and Philadelphia play a combined 14 games with Indiana and Orlando on road trips out west. Philadelphia’s arguably best chance to get their first win comes on the road against Minnesota. For someone about 45 minutes from Minneapolis, I really hope the Sixers get their first win in Oklahoma City instead.

For the most common teams in the West, they aren’t packing too much strength this week. Denver, the Lakers, Sacramento, and Utah play a combined 10 games. They’re no pushovers, but no Memphis Grizzly-type either. Dallas (three games), Golden State, the Clippers, Memphis, Portland, OKC, and San Antonio play combined 13 games.

Hopefully there are some upsets in the East’s favor. In the meantime, I’m really going to try and add some more posts this week. We’re just over a month into the season, so maybe time for a roundup relating to that.