Everything’s sunny for Andre Iguodala, who gave the Golden State Warriors a game-winning bucket last night only after Russell Westbrook did all he could for Oklahoma City.

But this isn’t about just last night. Iguodala, widely known for his great defense, has turned in a terrific season offensively as well. In fact, his shot chart seems like one normally reserved for Stephen Curry, Klay Thompson, or Kevin Durant, but it also brings back memories of golfing in the summer. Introducing, the putting green that is Iguodala’s shot chart: The rectangular sand trap in the right corner is a bit awkward since I doubt such bunkers exist, but it’s hard to complain when it could cover the entire court should Iguodala, for some reason, go on a horrific shooting slump.

Let’s not mix basketball and golf any more than we should though. Charles Barkley has shown what could go wrong when we take it too far:

What was the NBA like when Golden State last won in San Antonio?

As a basketball fan in Minnesota, I hear a lot about the Lakers’ 22-game winning streak against the local  Timberwolves. There’s hope next year, but I’ve been saying that since 2006.

It’s been even longer for Golden State and their struggles at San Antonio. Their last win came on Valentine’s Day in 1997.

Here were the logos of each team back then:

Golden State’s logo back in 1997. It would change a year later. They still sucked.

Since the last Warriors victory in San Antonio, four teams have relocated (Vancouver, Charlotte, Seattle, and New Jersey). One team has been added (Charlotte Bobcats), and there’s been about a kagillion uniform changes.

Here were some notable jerseys that made their debut during the ’97 season: 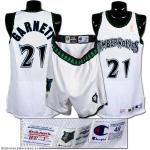 I would go into a novel about how awesome life was back in the ’90s, but there’s some basketball to watch. Speaking of television, here are some quick hits on some TV shows back in ’97:

Unfortunately, all of them debuted after the Warriors’ last victory in San Antonio.